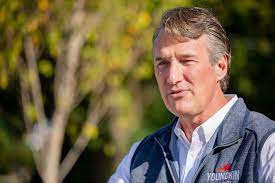 Gov. Glenn Youngkin released a report from the Department of Environmental Quality this week outlining reasoning and recommendations for Virginia to leave the Regional Greenhouse Gas Initiative.

RGGI (pronounced ‘Reggie’) is a cap-and-trade scheme that sets an overall cap on carbon dioxide emissions from the energy sectors of its 11 member states. It requires businesses – like Dominion Energy – to buy allowances out of that yearly cap for the carbon they put into the atmosphere. Those purchases happen at quarterly auctions, and allowances are always priced within a set range.

For advocates and the lawmakers who support it, RGGI is seen as a way to help businesses reach Virginia’s goal of zero-carbon energy production by 2050 in a cost-effective manner.

Since he’s been on the campaign trail, Youngkin has argued the program amounts to a carbon tax on ratepayers – who, in Virginia, are nearly all customers of one of our two monopoly electric utilities. The commonwealth’s regulatory system is also set up to have energy costs, including carbon allowance purchases through RGGI, pass onto ratepayers directly in their monthly bills.

The report shared this week sums up the argument:

“Because of the captive nature of their ratepayers, the ability for power-generators to fully pass on costs to consumers, and the fact that the Code of Virginia dedicates RGGI proceeds to grants programs, participation in RGGI is in effect a direct carbon tax on all households and businesses,” it reads.

The report was swiftly criticized by supporters of RGGI and Virginia’s Clean Economy Act, who say it doesn’t take the program’s benefits into consideration.

Bill Shobe, an environmental economist at UVA who helped design RGGI’s market, was involved in a state Department of Energy report late last year that evaluated different strategies for achieving a carbon-neutral economy at the lowest cost to ratepayers. That report was cited in the one released this week.

“When they cited our report, you know, it stood out,” Shobe said. “Because one of the key recommendations in our report on how to lower the cost of reducing our CO2 emissions was to stick with market mechanisms.”

Shobe says increasing electricity costs are inevitable “because the cost of getting our emissions down to zero is not trivial.” With or without RGGI, if we want to power our homes with clean energy, someone will have to pay to make that transition.

He says the market-based approach of RGGI allows businesses flexibility in meeting emissions goals, which helps them and their customers save money. He also points out that legislators have control over where auction proceeds are spent.

Some states send rebates to customers. Virginia lawmakers and advocates have already spent countless hours determining the funding split for the state – half of proceeds go to energy efficiency projects for low-income ratepayers and 45% goes to flood prevention, mitigation and recovery costs statewide, with the last 5% reserved for administrative costs. So a renegotiation of that might be difficult, but Shobe says sending some of those auction proceeds back to customers is an option.

“[The report] really doesn’t then turn around and also say, ‘here’s the savings that this will create,’” Godfrey said.

He sees the governor’s concerns being more with Virginia’s regulatory system.

Youngkin and Republicans attempted to push through a proposal to withdraw from RGGI during the General Assembly session this year but couldn’t convince the Senate Democrats responsible for cementing Virginia’s place in the program two years ago. It still appears that a legislative change is needed to get us out, but the administration has drafted a departure regulation for a state air pollution panel to consider as well as a letter notifying RGGI of the state’s intent to leave.